Being a Positive Citizen

Being Happy and Healthy

At East Acton Primary School we use an enquiry based approach to teaching and learning in History. This allows the children to focus their learning through a key question that guides and drives their learning while still looking at the larger picture.  Historians use questions to guide their research, allowing them to filter and process the information needed to answer it. This is why we create key questions for each unit to help the children develop their skills as historians. At the end of each unit the children will use what they have learnt to answer this question just like a real life historian would do.

As historians the children will be exposed to a variety of experiences to help them develop their historical skills and knowledge. They will have a chance to handle artefacts from that time period, look at a wide range of books and websites to learn about the past and engage in stimulating first hand experiences either through workshops or trips to a historical site. We want the children to have an inquisitive mind and ask why things have happened and what the impact has been on us as a society.

The academic year has been split into to three main topics and within each of these topics there will be a selection of historical themes. Children will be given the opportunity to revisit recurring themes and make connections as they study various units. Within each topic the children will be developing a selection of specific skills sets and as the years go on these will be built on to ensure a deeper understanding and greater depth of knowledge.

This unit helps to develop the children’s understanding of chronology and where these key civilisations sit in our history. We want the children to start looking at the world and seeing how the past is still with us today and what made these people so great. Ancient Civilisation allows the children to understand the methods of historical enquiry, including how evidence is used rigorously to make historical claims, and discern how and why contrasting arguments and interpretations of the past have been constructed.

We are very fortunate to live in a country that has a very rich historical past. This past has been greatly influenced by a wide range of people. It is so important that children understand how certain people have helped shaped the world we live in by how they lived their lives. In this unit the focus is to know and understand how people’s lives have shaped this nation and how Britain has influenced and been influenced by the wider world.

There has been a big push with the new curriculum for the children to have a good understanding of their local history since 1066. We will be focusing on Acton and Ealing across the last 200 years. Children will use real artefacts, books, photographs to find out about their local area and discuss the changes over time.

In Year 4 the children were looking at poetry that was written during the First World War. They also looked at accounts from soldiers during the Second World War and how the soldiers' felt. We discussed how it made us feel that these soldiers had given up their lives for us and then we thought about how they must have felt going to war. Using this as a stimulus along side a picture of a poppy field the children created their own poems. Here are a few of the poems that the children wrote.

I was standing in front of beautiful poppies,

In a field of sadness,

Imagining years and years ago soldiers fighting for our freedom and rights,

In loving memory of thousands of people,

Feeling grateful of what they done,

Tearful of what they had to do,

These soldiers need our love.

In a field of poppies,

Watching men charge into the battle,

I sadly sit down to cry my tears,

I hear people screaming as I walk away, 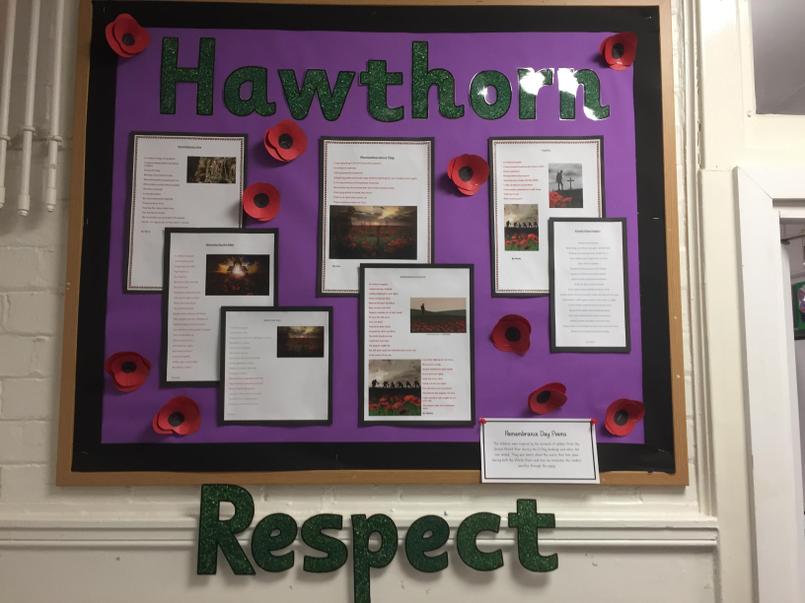 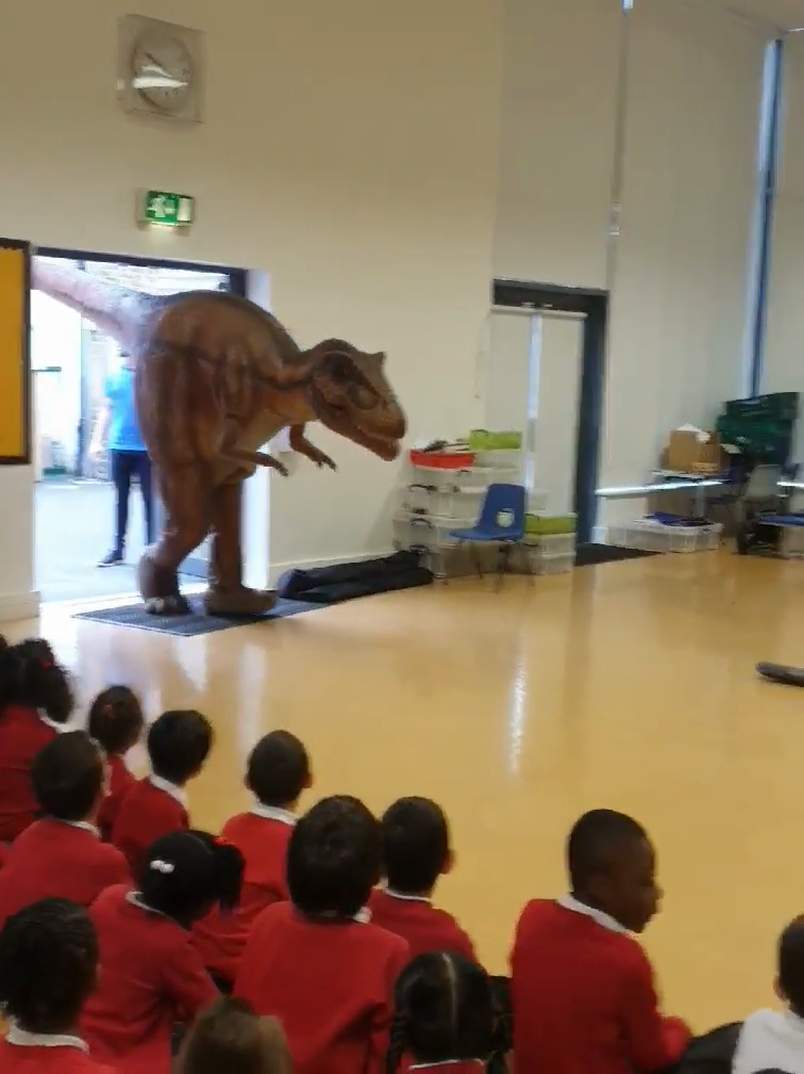 Here is the moment Sophie the T-Rex arrived in our hall. All very exciting! What a wonderful way to bring these creatures from the past back to life. 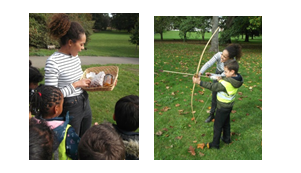 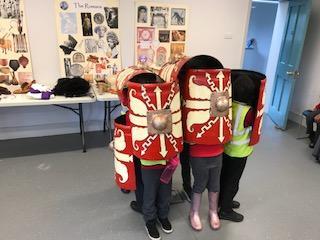 Year 3, 4 and 5 got the opportunity to different artefacts, solve mathematical problems and took part in a wide range of drama activities. This allowed the children to look at the similarities and difference between our world now and that of the Ancient Civilisation they were studying. The used a collection of source such as primary and secondary sources to gather evidence and make conclusions that enabled them to answer the key question for that unit.

‘The workshop was fun because we did lots of drama. It helped my learning because we examined different artefacts such armour and weapons.’

‘The workshop helped me learn about mummification and death process which helped my writing.’

‘We got to handle special artefacts such as helmets. I learnt about the King Minos and the Minotaur which linked to our writing English.’ 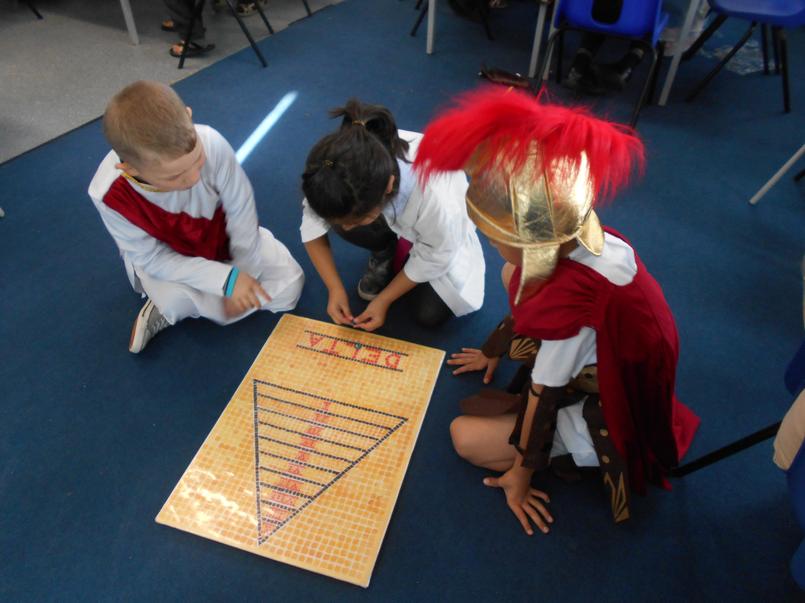 Here are year 3 children playing a game from the Roman period which linked to their learning of Roman Numerals in Maths. 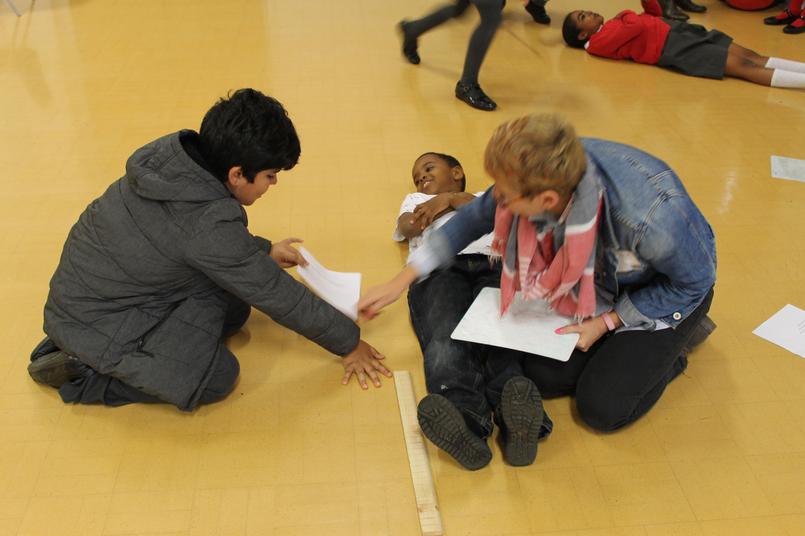 Here are year 4 children learning about Royal cubits which involved their four times tables. The children had to use and apply their knowledge of measurements  as they tried to fit a peer in their sarcophagus.

Unfortunately not the ones with chocolate chips.

Some cookies are necessary in order to make this website function correctly. These are set by default and whilst you can block or delete them by changing your browser settings, some functionality such as being able to log in to the website will not work if you do this. The necessary cookies set on this website are as follows:

Cookies that are not necessary to make the website work, but which enable additional functionality, can also be set. By default these cookies are disabled, but you can choose to enable them below: